At Abbotsford Chrysler, we aim to be much more than a stereotypical dealership. We want to be a local business known not only for providing the best customer experience possible, but also for making a positive impact in our community. And what better way to give back to the community that we love so much than partnering with the Vancouver Canucks stars, Jake Virtanen and Ben Hutton. It’s a perfect combination of two things we all love: the great city of Abbotsford and hockey!

The decision to partner with Jake and Ben from the Canucks was an easy one. Both are young, rising stars in the NHL, who are not only great team members but also beloved community figures. Jake, who is the recent No. 6 overall pick, is just 19 years old and an Abbotsford, BC native.

To start this great partnership off with a bang, we gave Jake and Ben their own Dodge Charger and Jeep Wrangler, courtesy of Abbotsford Chrysler! 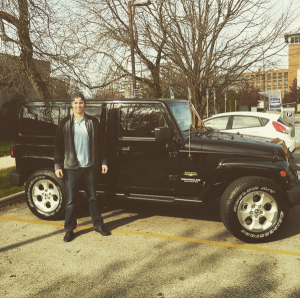 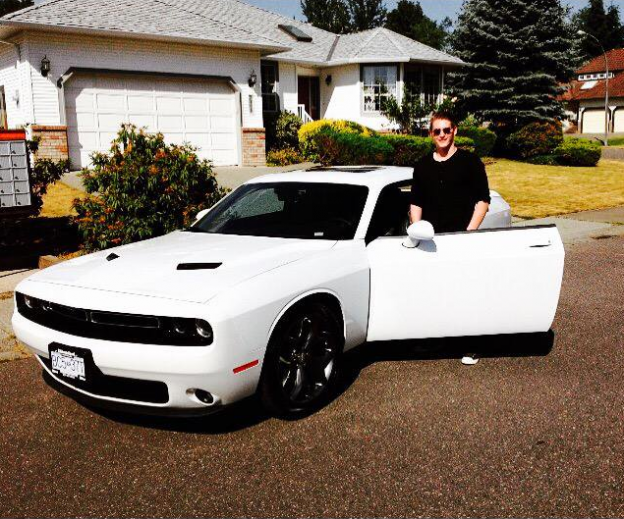 Meet Jake Virtanen
At a very early age, it was clear that Jake was going to be a great hockey player. Growing up, he looked up to a player in the NHL that shaped him as a person and a hockey player.

“I looked up to Markus Naslund. I admired his skill and positive outlook, and that is what I would like to pass on—keep working hard and stay positive.” – Jake Virtanen

By the age of 14, Jake was already a member of the Abbotsford Hawks league hockey team at the bantam level. In his rookie season he scored 68 goals and totaled 117 points in 59 games. Then, in 2011, the Calgary Hitmen picked Jake as the No. 1 overall pick at the WH Bantam draft. By the 2012–13 season, he was a regular in the rotation, scoring 16 goals and notching 34 points in 62 games. It was here that Jake really grew as a player and established himself as a force to be reckoned with on the ice. It wasn’t too long before it become clear that he going to be a top prospect in the 2014 NHL Draft.

Virtanen was selected No. 6 overall in the 2014 NHL Entry Draft by the Vancouver Canucks. He was the first British Columbia–born player selected in the first round by the Canucks since Cam Neely in 1983. After playing a year with a Canucks affiliate, the Utica Comets, Jake was named to the Canucks roster for the start of the 2015–16 NHL season. Then, on November 2nd, Jake accomplished what so many hockey players dream of doing; he scored his first NHL goal.

When Jake is off the ice and back in his hometown of Abbotsford, he love’s hanging out with his friends, going to Castle Fun Park and eating at his favorite local restaurants.

Meet Ben Hutton
Notorious for his ever-present smile and genuinely happy disposition, Ben Hutton has quickly become a crowd favorite with the Canucks fan base. Similar to Virtanen, Ben began playing hockey very early and was soon playing at a high level in competitive leagues, which helped prepare him for his journey to the NHL. Hutton played Junior A hockey with the Kemptville 73’s and Nepean Raiders of the Central Canada Hockey League before going to college to play for the Maine Black Bears of the Hockey East league. Hutton earned All-Hockey East First Team honors during his college career. Internationally, he represented Canada at the 2011 World Junior A Challenge, winning silver.

After his junior year with the Black Bears, Ben was drafted by the Canucks in the fifth round and was assigned to their affiliate team, the Utica Comets, after signing a two-year contract. Then, after an extremely impressive training camp, Ben was named to the Canucks roster to start the 2016–16 NHL season. On October 7, Ben made his NHL debut and set up Jannik Hansen for the game’s opening goal and his first career assist. 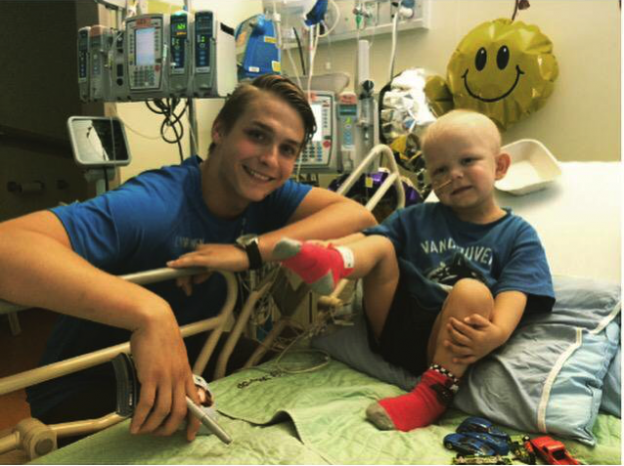 such a great day seeing the kids at BC Children's Hospital and met a huge Canucks fan #cheese @VanCanucks pic.twitter.com/NClYJikTSf

Ben and Jake both recognize that despite being so young, they’re still able to have a positive impact on people’s lives outside the rink. What makes them special is that whether or not they had become professional hockey players, you would still find them going out of their way to help others.

"I want to be known as a role model that gives back to people. For example, doing as many appearances like Canucks Holiday Exchange, or visiting sick kids at hospitals. I want to be able to put a smile on their face, and, hopefully, for that short time I'm visiting them make them feel that much better." – Ben Hutton

That’s how we knew that a partnership with Ben and Jake would align perfectly with our goal of making a positive impact on the community: They’re the optimal combination of model citizens and promising players on everyone’s favorite Vancouver hockey team.